IrcamLab has announced the release of The Snail, a tuner plugin that shows you the fundamental and all the associated resonances and harmonics of any instrument or sound in an easy to see graphic display. 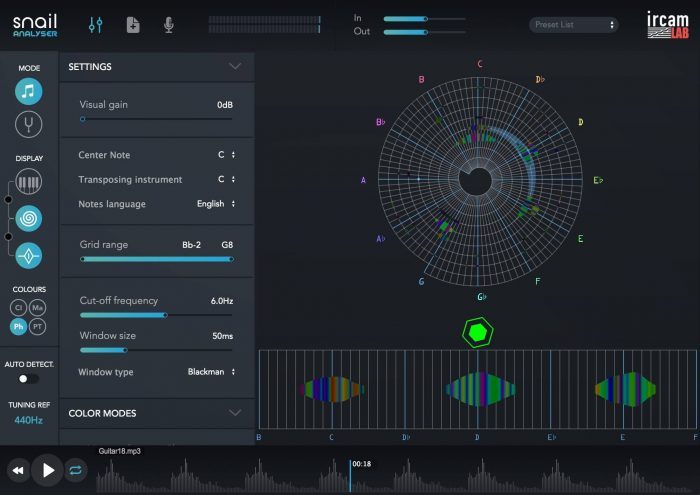 The Snail is a very high-precision frequency-domain analyzer that delivers an easy to understand representation of sounds based on the scales and notes aligned in spectrally active zones.

It offers a new way of tuning and analyzing an instrument in an extremely accurate way, displaying intonation and visualizing music and sounds in a way that can help anyone improve their listening and innotation!

Think of a film camera turning at 24 frames per second filming a bicycle wheel turning at 24 revolutions a second, the spokes will appear to be standing still. That means, for a Fourier analysis of frequency at 439Hz compared to a tuning reference of 440Hz, the demodulated phase will turn at 1Hz (as a slightly desynchronised stroboscope makes a rotating object have a slow movement). Think of audio signals ’beating’ as there is a interference between two sounds at slightly different frequencies.

Compared to standard spectrum analyzers based on Fourier-type analysis, the frequency accuracy is enhanced by a process based on the demodulated phase. This system is based on a recent patented technology, conceived at the laboratory of Science and Technology of Music and Sound IRCAM-CNRS-UPMC.

The Snail is currently available for Mac (VST/AU/AAX), priced at $99 USD. Windows compatability to be announced.