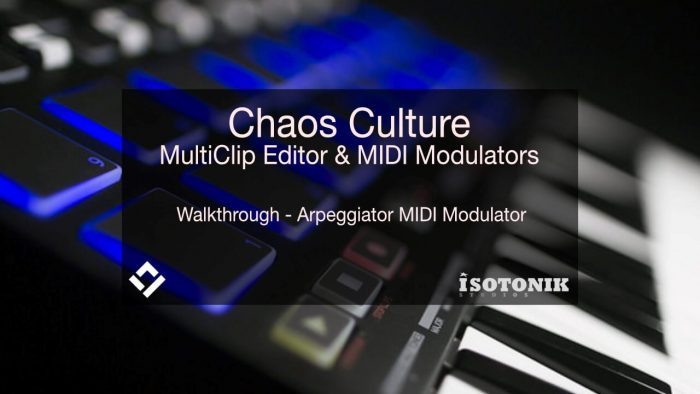 The original MultiClip Editor from Chaos Culture broke new ground in MaxforLive solving one of the most commonly requested features from Ableton Live Users: “How do i edit the notes of multiple MIDI Clips at the same time?”
Sebastian from Chaos Cultures solution was one so dynamically delivered that even Cycling 74’s very own Darwin Grosse said that the complexity of the underlying code of the device made his head swim!

With the first release solidly under Sebastian’s belt he set about adding a wealth of MIDI Modulators to the MultiClip Editor and released a standalone version of these (which works on just one clip at a time) in the MIDI Modulators device.

With this latest release he’s gone even further to add a whole new Modulator in an innovative and unconventional Arpeggiator. This non destructive MIDI effect uses a set of control notes that can be used to change Pitch and Velocity of the notes of a chosen clip, once you’ve auditioned and are happy with the results you can apply the settings to the clip.

Watch and listen to the video walkthrough and you’ll quickly see how breaking away from the traditional step sequenced or algorithmic arpeggiators could just be the spark you need to transform your melodies into something fresh, original and inspiring.

In addition to the Arpeggiator:

MultiClip Editor & MIDI Modulators is available for purchase for £23.99 GBP.