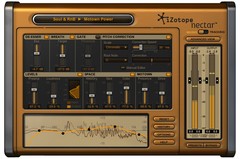 iZotope has released version 1.1 of Nectar, a complete vocal processing toolkit for Windows and Mac.

Nectar is a complete set of 11 vocal production effects combined in one plug-in that’s designed to give you immediate results.

Built-in Styles get the grunt work out of the way so you can focus on the creative finishing touches.

Nectar for Windows and Mac is available to purchase for $299 USD.