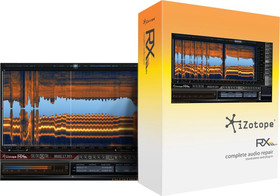 iZotope has released version 2.1 of its RX audio repair toolkit for Windows and Mac.