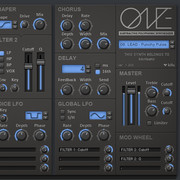 kiloHearts has updated its kHs ONE software synthesizer for Windows and Mac.

The release focuses on improving the audio quality and UI based on feedback from users. Also, a manual is released, publicly available in HTML and PDF format.

kHs ONE is currently available for the special price of 39 EUR (regular 99 EUR).