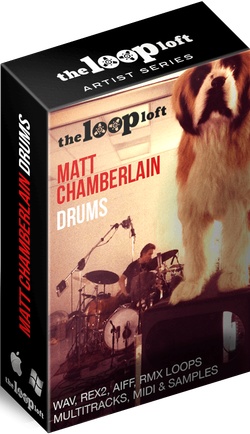 The Loop Loft has launched Matt Chamberlain Drums, a sample library featuring drum loops by one of the most in-demand session drummers of the past 20 years (Peter Gabriel, The Wallflowers, Fiona Apple, Kanye West, David Bowie, Elton John, and more).

With the release of Matt Chamberlain Drums, songwriters producers and engineers around the world now have unprecedented access to the unmistakable “vibe” of the drummer behind countless hit songs.

Recorded at Chamberlain’s personal studio inside of the famed Sound City complex in Van Nuys, California, the Matt Chamberlain Drums collection captures an incredible range of beats, sounds and styles. Nine complete “sessions” each give you dozens of rhythmic and sonic options ranging from organic brush grooves, to driving rock, to vintage soul, to dynamic and experimental cinematic textures.

Included in the collection are over 380 beats, fills and breaks, offering a massive variety of tempos, beats and genres. In addition, the Deluxe Edition gives you access to 15 channels of separate audio tracks recorded in pristine 24 bit/96 kHz audio, allowing you to mix every element of Matt’s drum kit, including kick, snare, toms, overheads and a variety of room mics. The Deluxe Edition also includes loops in all stereo formats (REX2, AIFF, WAV, Stylus RMX), as well as MIDI, allowing you to utilize the beats in any DAW or loop plug-in.

The sample pack is available for purchase in various formats, starting at $39 USD. Until July 10th, 2014, the pack has a $10 USD introductory discount.