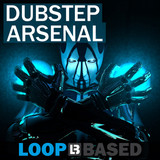 Loopbased has announced the release of Dubstep Arsenal, a collection of loops by Bassador.

‘Dubstep Arsenal’ is the newest collection from Loopbased and contains loads of inspiring Dubstep loops produced by the up and coming Bassador. He created a top-notch sample pack serving the many tonalities of today’s Dubstep productions. You will find the popular wobble loops as well as laid-back half-time grooves, expansive atmospheres and stilted rhythms.

This library is jam-packed with twisted and raw drum patterns, wonky bass lines, moody music loops, atmospheric soundscapes and frantic no-kick tops. All loops are offered at 140 BPM so you can simply mix and match loops to create your own dubbed-out hardstep grooves.

Dubstep Arsenal is available to purchase for 15 EUR.