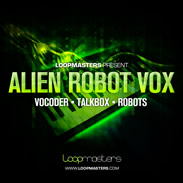 For Producers looking to emulate the vocoded and robotised sounds that have graced many of the top Dance and Hip Hop tracks of the past 10 years, from the artists such as Daft Punk, The Freestylers, Air, Mylo, Kraftwerk and Grandmaster Flash – then the waiting is over as the Alien Robot Vox pack from Marco Scherer and Loopmasters has arrived.

This collection of royalty free Vocoded Loops, Android and Robot talk, Cosmic Bot Loops, One Shots and a collection of Vocoded Drum loops and Synth parts are all producers need to inject that Human feel to electronic tracks needing an edge or hookline.

Alien Robot Vox is available to purchase for £19.95 GBP.