Loopmasters has announced a Freemasons Competition in celebration of the upcoming 100th Artist Series sample library. 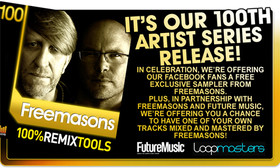 We’re approaching a big milestone at Loopmasters – our 100th Artist Series release! Over the years, the Loopmasters Artist Series have developed into an industry standard for sample packs from world class Artists in a variety of genres.

As part of the celebration of our hundredth release, we’ve teamed up with two more big hitters in the EDM world – Freemasons and Future Music to bring you a special opportunity.

We are offering you the chance of a lifetime – to have your track mixed and mastered by the Freemasons! That’s right. The lucky winner will have the opportunity to supply the stems of their own track to Freemasons and have them work their magic – mixing and mastering it in the way that has made them a household name in the clubbing community and set them as sought after producer/remixers.

Freemasons have also put together a free sample pack which contains sounds not included in their forthcoming Loopmasters release. The pack is available as a free download for Loopmasters Facebook fans.