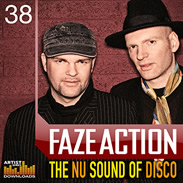 Electronic disco stalwarts Faze action aka brothers Robin and Simon Lee have been at the forefront of the re-emergence of Disco, Funk and Soul onto club dancefloors in recent years, providing a sonic backdrop for clubbers looking for something other than the sometimes generic minimal sounds currently on offer throughout the industry.

Over the years Faze Action blended Electronica with Classical, Pan-African, and Latin music. Their sound is also heavily influenced by Funk, Disco, and Jazz, and their talents at blending these elements into new, club ready productions has meant that they continue to set the standard and redefine genres as they continue their musical journey.

Faze Action – The Nu Sound of Disco is available to purchase for £24.95 GBP.