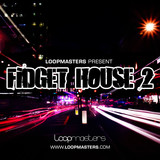 Fidget House 2 is the sequel to the much praised debut release from Darren Payton, whose production skills impressed us so much we had to sign him for a second volume. His production of glitched out, funked up and washed out house beats, alongside those heavy hoovered, sidechained and warped basslines hit the spot every time and have warranted all the enthusiastic emails we have had from Fidget House producers worldwide looking for more sounds from the Payton studio – well here they are people!

Artists such as Trevor Loveys, Herve, Fake Blood, Digital Filth, Switch and Jack Beats have exaggerated the initial elements of fidget and progressed things on to new levels which make this genre more challenging from a production perspective and perfect for the dance floor as the mash up medium of choice for many producers and clubbers worldwide in 2010.

This pack is even bigger than the first one and we are sure that even producers of Minimal, Electro, Tech and Jackin House music will find plenty of sonic ingredients to add to their mixes for inspiration and solid dance floor friendly grooves.

Fidget House 2 is available to purchase in various formats for