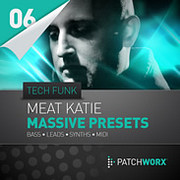 Patchworx 06 – Tech Funk Synths for Massive, is a collection of Bass, FX and Leads exclusively created by Meat Katie, one of the most respected producers in the Tech Funk scene right now.

South-west Londoner Mark Pember (AKA Meat Katie) has had a long history in Dance music. In his time he has recorded for such prestigious labels such as Wall of Sound, R&S Records , Kingsize, Bedrock, Perfecto, Great Stuff, Renaissance, Saw Pember has also remixed for / collaborated with Arthur Baker, U.N.K.L.E, Deep Dish, D.Ramirez, Peace Division, Chicken Lips, Robbie Rivera & James Zabelia, to name but a few.

In detail producers should expect to find here a great selection of patches which are designed to complement Drum & Bass and Dubstep productions, but will of course work well for other styles also.