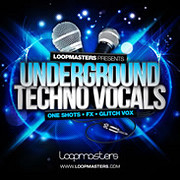 Whether you are making Techno, House, or other forms of Dance Music – these samples recorded by pro session singers have been mangled, chopped and edited to provide you with the building blocks for some awesome grooves like those found in some of the most current dance anthems around today.

Underground Techno Vocals is available to purchase for ££19.95 GBP. Wav Loops Pack and One-Shots & Sampler Patches are sold separately for £11.95 GBP each.