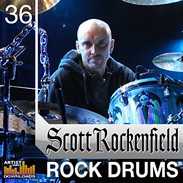 As the man behind the kit for Queensrÿche, Scott Rockenfield has defined himself as a drummer par excellence, providing both rhythmic support and percussive propulsion with his signature style. A man who can make his hi-hat work as compelling as his tom fills, Rockenfield further expanded the art of metal drumming with inventive playing and showing that subtlety was just as important as aggression. Listen to the seminal rock opera Operation: Mindcrime for proof positive…

In 1981 at the age of 17 he founded the now Multi-Platinum rock band Queensryche. And now after almost 30 years together they have toured around the world dozens of times in over 45 countries and have released over 14 records and with sales over 30 million copies worldwide.

Loopmasters have teamed up with Scott to provide multi-genre producers with a fantastic, fresh and original collection of some of the most truly authentic Rock Drum samples currently available in this royalty free sample collection.

If you are looking for the real sound of Rock Drums to use in your productions then look no further, as Scott has played out some of his favorite rhythms and beats on his preferred rock kits to present here a grooving and heavy hitting collection, now known as Scott Rockenfield’s Rock Drums!

Scott Rockenfield Rock Drums is available to purchase for £34.95 GBP.

Goldbaby Productions, birthday good for 20% discount on all Goldbaby products