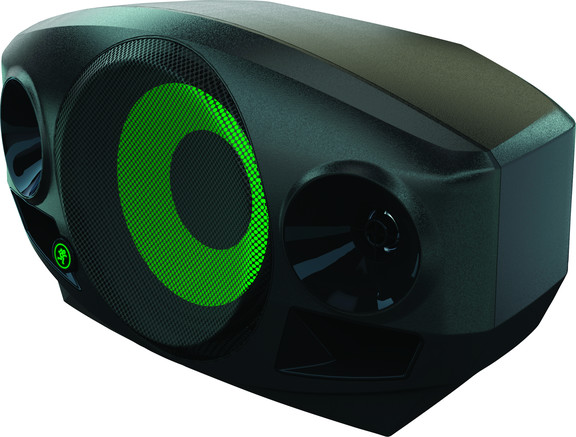 Featuring Bluetooth® music streaming, a full-featured 4-channel digital mixer and a powerful control app for iPhone® and iPod touch®, FreePlay is the ultimate all-in-one stereo PA solution for a tremendous range of applications.

“FreePlay is perfect for everyone from musicians and singer/songwriters on the go, to educators, public speakers and even everyday music lovers,” remarked Matt Redmon, Mackie Senior Product Manager. “FreePlay delivers an amazing solution to all in an innovative, easy-to-use package.”

“The ability to incorporate a Bluetooth stream with live instruments sets FreePlay apart. Musicians are going to love being able to easily mix in backing tracks right from their mobile device,” commented Redmon. “And with hands-free music streaming, FreePlay is also an amazingly high-output music playback device perfect for parties, weddings and backyard BBQs.”

One of FreePlay’s most innovative features is complete wireless control using the FreePlay Connect™ app for iPhone and iPod touch (available soon). The FreePlay Connect app puts the user in control of everything – from simple level adjustments to control over professional performance features like a built-in feedback eliminator, application-specific speaker voicing modes and 16 vocal/instrument effects. For corporate audio applications like presentations or public address, the FreePlay Connect app provides discrete level control from anywhere. Plus, musicians can simply mount their phone on their mic stand for distraction free mixing during performances.

FreePlay’s immensely portable design is underlined by a choice of AC or battery power, including an optional rechargeable lithium-ion battery pack or standard D Cell batteries. Perfect for street performers or any application where wall power is either not available or difficult to get to, FreePlay sets a new standard for battery-powerable sound solutions. FreePlay also offers several optional accessories to round out its extreme versatility. A unique kickstand/ pole mount accessory connects directly to FreePlay and allows it to be mounted on a standard speaker pole for increased coverage. It also allows the user to tilt FreePlay back to a 45-degree angle for better monitoring when FreePlay is on the ground. An optional lithium-ion battery pack delivers up to 10 hours of playback and is rechargeable so users always have the power they need. There’s also a durable carry bag available to protect during transport and storage that includes handy pockets for mics, cables, etc.

“FreePlay is the most versatile PA we’ve ever created. You get a powerful, portable PA with wireless music streaming, amazing professional sound tools and the ability to control it all from your phone,” remarked Redmon. “Plus, with battery power, you can literally take FreePlay anywhere. We are excited to offer this level of sonic freedom.”

Come experience FreePlay and learn about its wide array of application solutions during 2015 Winter NAMM. Mackie is located upstairs in Demo Room 209A/B.