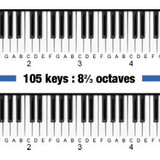 Grand pianos that offer an expanded keyboard range are rare and extremely expensive. A very well-known example of such a high class instrument is the Bösendorfer Imperial Grand, with its 97 keys expanding the bass range. Stuart & Sons have also built innovative 102 keys pianos, increasing both the bass and the treble range of the piano.

MODARTT takes up the challenge by providing an unprecedented extra-large key range for its exclusive grand pianos K1, C3 and M3, with no less than 105 keys (17 keys more than the standard keyboard range), ranging from ultra-low rumbling bass to very high bird-like pitches.

The keyboard range expansion was developed to correspond to an increasing demand from Pianoteq users for additional notes. The extended sound palette, obtained thanks to the powerful Pianoteq physical modelling, can be used for example in prominent piano works by Debussy, Ravel and Bártok.

The expanded piano models are included in the latest update 3.6.5 which is free to all Pianoteq customers.