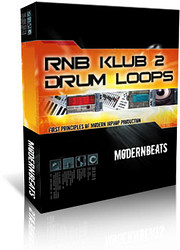 ModernBeats has announced the release of RnB Klub Drum Loops 2, a collection of R&B drum loops from billboard remixers.

Totaling over 485MB of loops, ‘RnB Klub Drum Loops 2’ comes filled with a large variety of hit-worthy R&B club drum production – both programmed and live performances. All loops were modeled in the style of platinum R&B music producers such as Stargate, Timbaland, Bloodshy and Avant, Red Zone, Darkchild, Scott Storch, Dr. Dre, and the Neptunes.