Loopmasters has released the Monster Sounds Baker Brothers Bundle, a collection of sample packs by The Baker Brothers and Funky Drummer at a discount. 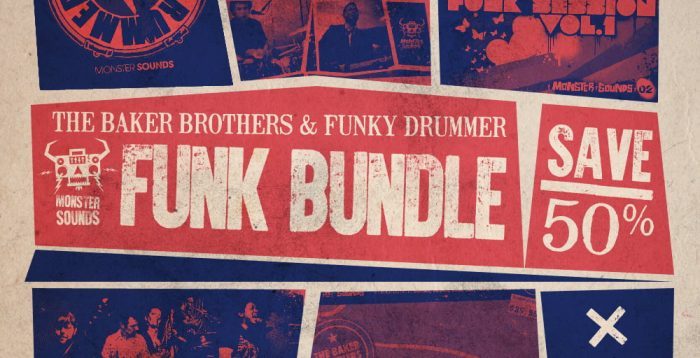 The Baker Brothers need little introduction, well know and respected in the own field of expertise, each band member is a master of their instrument and involved in many sessions and projects with renowned performers from all over the globe. Bring them together in the studio or on stage and you have an explosion of Funk energy and unparalleled musicianship the like of which has not been captured on a sample pack before.

Over the years we have had the pleasure of putting these guys into the studio many times and each time they have created a wealth of amazing content, never holding back any of the good stuff and giving what we feel are the best live funk sample loops out there… period.

Each time we have recorded in high-end studio’s with outstanding analogue hardware and live rooms.

Using ONLY the classic preamps, compressors, mic’s and desks of the era to capture the genuine Funk sound, even recording to tape in some cases to make sure the sound is amazingly rich and full of depth.

As a Special treat we have bundled the 4 Baker Brothers packs together with our Revenge of the Funky drummer Drum pack starring the bands drummer and this gives in total a frankly hard drive busting 6.8 GB of Content. With a mind bending 3056 total loops.

The Monster Sounds Baker Brothers Bundle is available for purchase for £89.95 GBP.