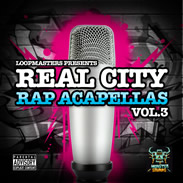 Monster Sounds has released Real City Rap Acapellas Vol. 3, a collection of royalty free Rap Acapellas from some of the worlds best MC’s.

Blurum13 is well known for his work with Dj Vadim, being part of the group One Self also his collabs with Aquasky, his releases on Ninja Tunes and Jazz Fudge amongst many many other projects around the globe. As far as we can tell he is virtually a nomad, spending most of his time on the road touring all over the world, and we mean ALL OVER! He has stepped on the stage with some of the best names in the scene.

Blurum13 is well known as a Lyrical bar raiser and has spared nothing in delivering some super sharp vocals packed with real lyrical content. BluRum has reached out to his MC family to bring in some of the the freshest working emcees out there onto this pack.