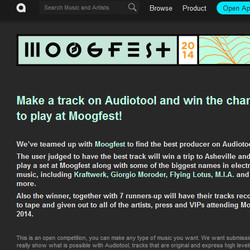 Moogfest has announced the Moogfest Audiotool competition, offering participants a chance to play at Moogfest and get released on a compilation.

Starting today, Moogfest is inviting anyone to produce a track – using the free cloud-based audio workstation Audiotool – and submit it to the Moogfest Competition. The winner gets to play a set at Moogfest in Asheville, North Carolina, taking place from the 23rd to the 27th of April 2014. The winner will also, along with 7 runners up, have their tracks included on a limited edition release which will go out to the artists, VIPs and press who will be attending Moogfest.

Participants will have until the 25th of March to submit a track to the competition. A select panel including some of the Moogfest artists will then judge the tracks, with the the winner being announced on 1 April 2014.

Moogfest is the annual festival that celebrates the innovative spirit of founder Dr. Robert Moog, an American pioneer of electronic music and inventor of the Moog synthesizer. Emmy Parker, Brand Director at Moog Music Inc commented: “Moogfest represents the synthesis of technology, music and art. Audiotool’s innovative platform empowers emerging artists to create on their own terms. We are excited to offer Audiotool’s rich community of musicmakers an opportunity to be a part of Moogfest 2014.”

Since the 50s Moog Music has pioneered and developed devices that offer artists endless possibilities when it comes to creating sound. Audiotool, which started in 2008, brings together a range of retro and new school synthesizer emulations running in the browser, allowing collaboration and free access for anyone. The browser-based audio workstation is all about democratising the process of music creation and collaboration in the cloud. This partnership offers a unique opportunity to combine forces and to capitalize on the natural strengths and alignment of the two brands.

Audiotool inventor André Michelle said: “this partnership is huge for us and our users will be super excited about the chance of winning a set at Moogfest, for one just because of the incredible line-up. It’s also a unique opportunity for Audiotool users to have their music critiqued by some of the Moogfest artists.”

The grand prize is playing live set at Moogfest (flight, hotel and artist pass included), and 1st – 8th place winners will get their tracks on the Moogfest 2014 compilation.