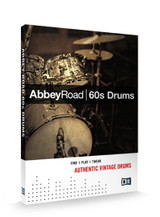 This KONTAKT Instrument delivers expressive acoustic drums that combine detailed realism with flexible and nuanced control. Containing no emulations or acoustic modeling of any kind, this instrument consists entirely of high-quality samples of two vintage kits – beautifully recorded with period equipment in Abbey Road’s legendary Studio Two. The sound of ABBEY ROAD | 60s DRUMS can be easily molded from within the instrument itself, going from vintage to modern and taking in all points between.