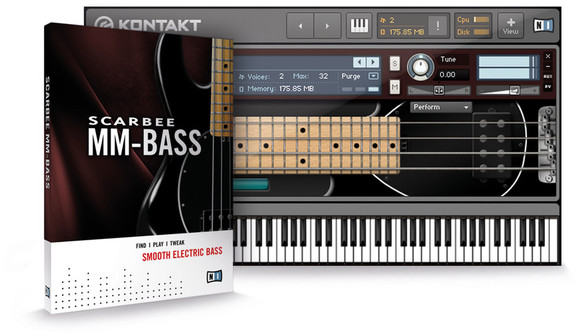 Native Instruments today introduced SCARBEE MM-BASS, a new software instrument that provides an authentic rendition of the distinctive Musicman Sterling electric bass. MM-BASS is based on the acclaimed Scarbee Black Bass library, and is the latest release in the partnership between Native Instruments and sampling expert Thomas Hansen Skarbye.

Powered by the industry-leading KONTAKT engine and playable both via the free KONTAKT PLAYER or the full KONTAKT sampler, SCARBEE MM-BASS recreates the full sonic spectrum of the Sterling bass guitar, a modern classic whose characteristic tone has become a mainstay for funk, hip-hop, disco and similar groove-oriented genres. The instrument was created with assistance from seminal producer Nile Rodgers, and is available in two separate versions that address different musical applications and production requirements. The standard version was recorded through a DI box for a clean “funk” sound, and retains full flexibility for individual re-amping and further sound processing. The optional “Amped” version offers the choice between four different amp characteristics, providing various ready-to-record tones for rock, pop and urban genres.

Scrabee Pre-Bass Amped expands on the already available Pre-Bass instrument by providing additional versions of the instrument recorded through the same four different amplifiers as the MM-Bass Amped instrument.