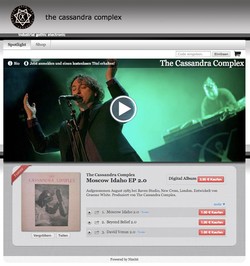 Nimbit has released a major multifaceted update to its direct-to-fan sales and promotion platform.

While Nimbit now delivers more, it costs less-much less. Commissions on sales transactions have been reduced from 16.5% for all accounts to 10% for Nimbit Free and Plus and a miniscule 5% for Nimbit Premium accounts. And unlike competitors who only offer low commissions on digital goods, these rates also apply to sales on physical goods as well. For example, if you sell a $10 CD with a Plus account, your commission will only be $1; sell it with Nimbit Premium, and your cost is only 50¢!

Direct Pay — Another long awaited new feature to Nimbit is the shift to a Direct Pay model, where subscribers get paid directly, via PayPal, as they make sales. This is the music business version of instant gratification!

Self-Fulfillment — The updated service also adds a much-requested self-fulfillment option for physical goods. Nimbit previously picked, packed, and shipped all orders for physical products like CDs, vinyl, and t-shirts from their U.S. warehouse. Now subscribers to Nimbit Plus and Nimbit Premium have the option to ship products themselves from anywhere in the world. Nimbit will continue to offer complete fulfillment services as an option in Premium accounts.

In addition to support for local currencies, Nimbit subscribers can set their storefronts to display in English, French, German, and Spanish. Support for additional currencies and storefronts in other languages will be introduced as needed to meet customer demand.

“Musicians around the world all need a way to create a supportive relationship with their fans, and that starts with the ability to sell direct,” commented Nimbit co-founder and president Phil Antoniades. “By adding local currencies and native languages to the Nimbit platform, we’re giving more artists around the world a deeper connection to their fans.”