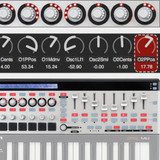 Novation has released version 3.7.4 of Automap, the software for Novation controllers.

Automap is a piece of software that comes with all Novation controllers. It has been designed to make the job of assigning your hardware controls to various software parameters quick and easy.