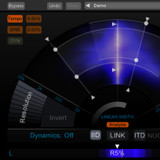 NuGen Audio has released version 3.1 of Stereoizer, a stereo enhancement and adjustment plug-in for Windows and Mac.

Stereoizer is a high-specification stereo image manipulation tool suitable for natural expansion, reduction and introduction of stereo width at any stage of the audio production process.

Developed for and tested by professional audio engineers, Stereoizer adds natural sounding width and depth to any audio recording, mono or stereo, leaving the inherent character of the original source intact. Quite simply Stereoizer will make your audio more coherent, highly polished and spatially balanced without adding artificial reverberation, chorusing or delay.

Stereoizer is available to purchase as an effect plug-in for PC and Mac (VST/AU), priced at $99 USD.