pMix hosts four VST plugins and lets you interpolate between presets by navigating a 2D visual environment. Presets are represented by coloured balls that are positioned on a plane. The size of each ball and its proximity to the cursor affects the weight of the associated preset in the interpolation. 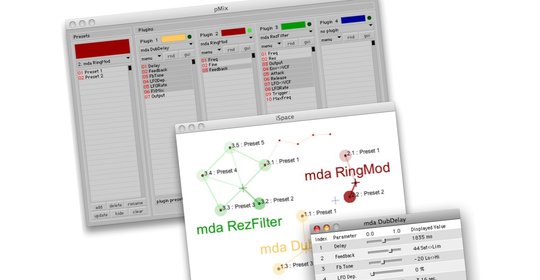 pMix is easy to use and has some fun features such as automation, real time visual feedback and randomisation.

pMix is released as open-source, free software (donations appreciated). It is currently only available for Mac (application + source).

Visit Oli Larkin for more information and a link to download pMix.