Oli Larkin has updated the Endless Series v3 plug-in for Windows and Mac. 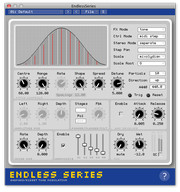 It works as a tone generator, a ring modulator, phaser, flanger or resonant filter bank effect.

Endless Series is available to purchase for Windows and Mac (VST/AU/RTAS/Standalone) for £29.99 GBP. The Standalone version for Mac is also sold separately on the Mac App Store for £6.99 GBP.