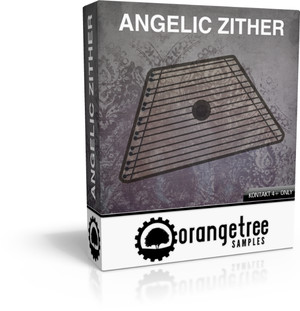 Angelic Zither is a handmade 15-string, pre-80’s zither from the Republic of Belarus (a little west of Russia). The zither’s strings are tuned diatonically in the key of G, but the samples are stretched to cover the instrument’s range chromatically. Although it only spans two octaves (stretched to 4 octaves total), this zither has a gorgeous, magical tone.

We sampled the zither using a close dynamic mic and a pair of small diaphragm condenser mics as a stereo overhead, and you can blend between these two signals to get the tone you’re after. The sample library has 3 dynamics, from soft, delicate notes to loud, resonant plucking, each with 3 alternating round-robin samples. The release samples have three round-robins and three dynamics as well, capturing the slight buzzing sound that the string makes when muted.