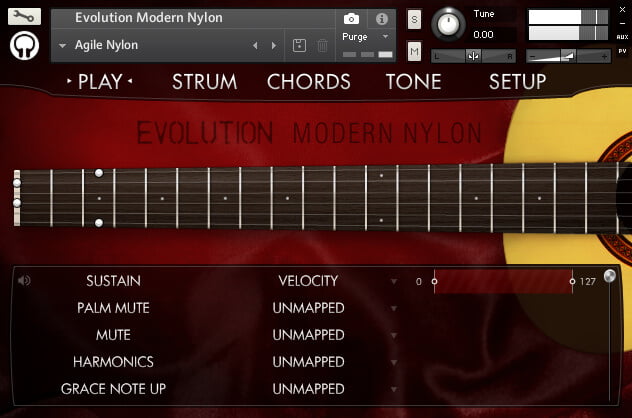 There are times when you need the crisp attack of a steel string acoustic guitar, but the distinctive sound of nylon strings is often more suitable for a mellower acoustic guitar tone. Evolution Modern Nylon’s tone works with classical guitar as well as pop/rock guitar tracks. By moving the pick position closer to the bridge and employing the guitar body percussion hits included, users can also achieve convincing flamenco guitar parts, too.

For the sampling session, Guy Randle brought in the versatile and accomplished guitarist Michael Dowdle. Michael Dowdle has an impressive musical history. His session guitar work includes recording for artists such as Marie Osmond, The Osmond Brothers, John Schneider, David Archuleta, and The Jets as well performing on numerous movie and TV scores. He has also played on stage with artists like Brian Wilson of the Beach Boys, The Coasters, Sam Cardon, and countless others. Michael’s extensive and diverse work has earned him the reputation of being able to play a wide variety of styles authentically, from elegant classical guitar work to gritty blues riffs. This versatility was invaluable, resulting in guitar samples that suit many styles of nylon guitar playing.