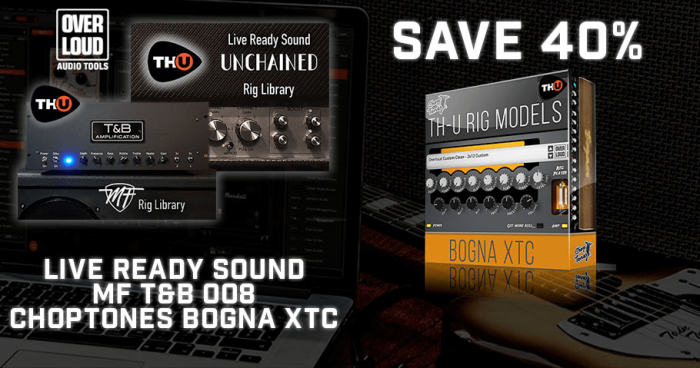 Bogna XTC is the TH-U expansion library created by Choptones, based on the sound of a Bogner Ecstasy 101B0.

Born in the late ’80s but placed on the market just in 1992, the Bogner Ecstasy was the answer to all guitar players who needed a large palette of guitar tones without using multi-amp settings or multi-channels preamps.

Reinhold Bogner figured out that the combo preamp and power amp couldn’t give the right dynamics and responses of a single circuit unit, so brought us this Swiss-Knife amazing amp.

The “simple” mission with this one was to give users the amazing tone of vintage amps.… mission accomplished.

LRS UnChained is the TH-U expansion library, signed by Live Ready Sound, seeking to recreate the sound of an authentic Metropoulos DVL-1 head through many cabinets, mics and speakers.

MF T&B 008 is the TH-U expansion library, signed by Marco Fanton, seeking to recreate the sound of an authentic T&B 008 Head built by the Italian boutique manufacturer T&B Amplification.

The 008 is a single channel head which delivers a hot rod British style. The design is based on a British 800 circuit, modded to add a massive amount of gain with 4 x KT88 tubes and 4 x 12AX7 tubes.