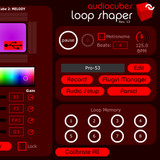 LoopShaper is a standalone application, hosts your VST instruments, and lets you interact with them in a hands on fashion through AudioCubes. With LoopShaper, AudioCubes and a VST instrument (some are freely available), you have everything you need to create interesting sound material and loops.

The software will loop and record, and will let you record your interactions and play over them continuously. There are various controls available for the loop memory and to freeze the loop once you are satisfied with it and only want to control the notes or the parameter changes, for example. There is also a loop memory deck available to store and recall loops, which facilitates using LoopShaper with live performance or with lengthy recording sessions.

The resulting sound can be recorded to WAV files on your computer’s harddisk. If necessary you can import the files into your favourite DAW for further editing and mixing.
LoopShaper works with ASIO for low-latency sound output. If your audio interface doesn’t support ASIO you can always use the built-in sound card of your computer using a freely available ASIO driver such as ASIO4ALL.

To help with timing, there is a built-in metronome in loopshaper.