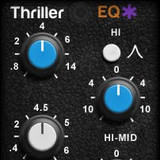 Phoenixinflight has released version 1.3 of ThrillerEQ, a free equalizer effect plug-in for Windows.

ThrillerEQ is a VST Plugin based on the GREAT RIVER HARRISON 32 EQ Equalizer. These equalizers were used in Harrison 32 Consoles, on which countless hit records were produced, including Abba, Queen and Michael Jackson. It was used by Bruce Swedien in the recording and mixing of Michael Jackson’s Thriller, the best-selling album of all time! Since ThrillerEQ does not exactly reproduces every detail of its hardware counterpart (non-linearities, harmonics etc.), it is not an exact emulation. However, this plugin features EQ parameters which are very close to the original device.

ThrillerEQ is available to download as a freeware VST effect plug-in for Windows PC.