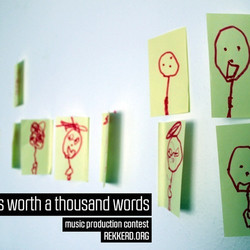 The theme of the most recent music production contest at rekkerd was to create a piece of music inspired by an image.

For this contest, the idea is to take a photograph as your “muse” for a piece of music. Kind of similar to how you would write a soundtrack for a film. Use an image of a person, object, environment, or whatever might inspire you.

A total of 36 tracks were submitted. With a great variety in style and approach, I can imagine the contestants had a hard time picking their top 6 favorites!

It was a very close finish between the top 3, each just trailing 1 point behind the other. The same for spot 4 to 6, with just a few points difference.

So, without keeping you waiting any longer, here are the winners.

The top 3 winners will receive a prize from D16 Group, as well as a pick of the prize pool in order of placement. The remaining prizes from the pool will go to the following entries.

Congratulations to the winners, and many thanks to all who participated!
Hope to see you again next time.