500 billion is the number of plastic bags consumed worldwide every year (1 million per minute), and 500 is the amount of years it takes for a plastic bag to decay in a landfill.

Spurred by a filmmaker’s documentary, the English town of Modbury became the first in Europe to ban plastic bags outright. 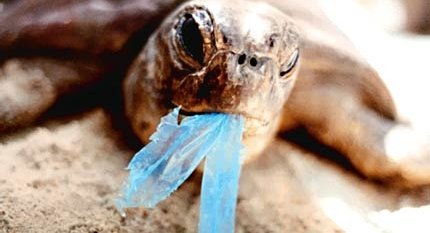 It was watching sea creatures choke on plastic bags in the Pacific Ocean that finally persuaded Rebecca Hosking that enough was enough. The British filmmaker had already recoiled in disgust at deserted Hawaiian beaches piled up with four feet of rubbish, the jetsam of Western consumerism washed up by an ocean teeming with plastic. Now, filming off the coast, she looked on aghast as sea turtles eagerly mistook bobbing translucent shapes in the water for jellyfish

A good reminder to bring my own bag when going shopping and to decline extra bags if I can carry the items (or stick them in the bag I got with something I bought earlier). When doing groceries without a bag, I like to use discarded product boxes (the ones they stock from) which later serve as “old paper” recycling storage boxes in my home.