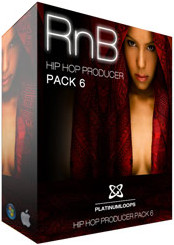 This RnB edition of Hip Hop Producer Pack 6 takes you in a purely electronic direction and offers more of a Pop / RnB vibe. With influences from Lady Gaga, Kanye and Rihanna we’ve ramped up the electronica to offer you a cutting edge hip hop sample pack.

Boasting 7 song construction kits with drums, bass, pads, strings, loads of synth’s and some vocal samples this loop pack has everything you need to lay down some smokin hot RnB Pop tracks in record time. From slow grinders to mid tempo club bangers, Hip Hop Producer Pack 6 – RnB will make your productions thumpin!

Hip Hop Producer Pack 6 – RnB is available to purchase as an instant download for $39.95 USD.