Ploytec has announced the release of the Ploytec „πλ² Pi L Squared“ Leukos synthesizer at NAMM 2015. 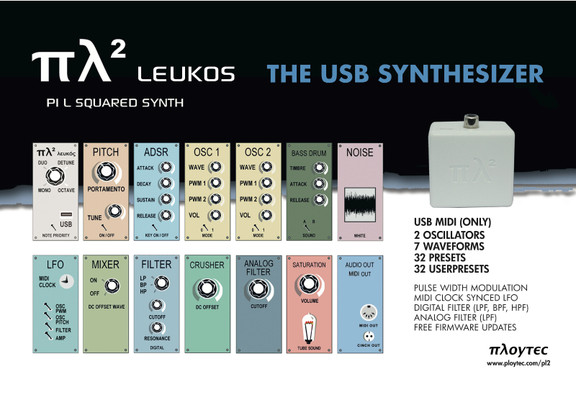 Dressed in white, it exclusively works with a computer or iPad® (camera connection kit required) when attached via USB to its micro-USB connector. It also features an additional individual MIDI output, e.g. for connecting the original (black) Ploytec „πλ² Pi L Squared“.

At Ploytec’s NAMM booth in Hall A booth #6424 visitors can also take a look at the brand new iPad® πλ² synth editor and see a preview of the upcoming firmware V2.1. The new firmware allows not only for higher filter resolution, MIDI portamento control and legato playing, it also (finally) enables the πλ² to map its numerous MIDI controllers via the software editor. This means musicians no longer have to match the πλ² MIDI controller numbers, instead now the πλ² can easily be set to match the musician’s existing MIDI rig.

Soundiron releases Voice of Rapture: The Bass for Kontakt