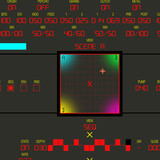 Footile is the remix of a vst effect by Novuzeit, Motile. Motile and Footile share the same serial-multifx concept and sound architecture but with a different modulation sistem.

In Footile, the effects parameters can be tweaked on four different “scenes”. Each scene is shown (colour coded) as a corner of a xy pad in the middle of the interface, so moving the cursor will morph each scene into the others.

Furthermore, morphing can be modulated with independent & mixable lfos, sequencers, envelope followers, randomizers (s/h), operating on x or y axis or both at host-synchronized rates.

Inspired by a certain quest for failure, Footile can be pretty unsubtle. It will treat signals with the following fx chain: pitch shifter-bitrate crusher-psycho-grains-glitch-metal-filter-control. Every effect can be disactivated and mixed at will.

Footile is available to download as a freeware VST effect plug-in for Windows PC.