dearVR lets you turn your flat stereo multitrack sessions into an immersive 360º soundscape that envelops your listeners when they hear your music on headphones.

Build an interactive, virtual acoustic environment for video games or VR/AR applications that will blow your client away. 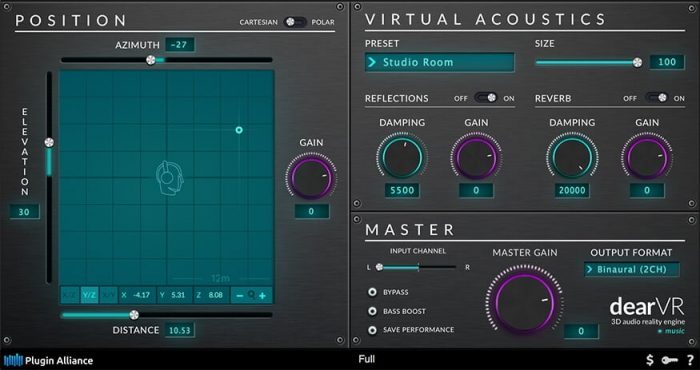 dearVR music allows you to create a virtual, three-dimensional world in which you can move each inside any of 18 virtual acoustic environments, including a concert hall, church, stage, drum room and more.

dearVR music breaks the shackles of stereo and planar surround sound to turn your DAW into a 3D virtual reality powerhouse. No advanced engineering chops are needed. Load dearVR music onto a track in your mix and choose one of 18 pristine virtual acoustic presets. Then simply drag your mouse around in the plugin’s intuitive interface to position the track virtually behind or in front of the listener, above or below their head, to the left or right, closer or farther away—at any angle and distance in a 3D soundstage—for mind-blowing playback using conventional stereo headphones.

Your moves can be recorded in real time with your DAW’s automation, and the shape and dimensions of each virtual space can be changed using controls that adjust its size, damping, and balance of early reflections and diffuse reverb.

dearVR pro offers two modes of operation. Simply drag your mouse around using the plugin’s graphical XYZ pad to position a track’s sound anywhere in a 3D soundstage, or use separate sliders for adjusting the sound’s elevation, azimuth and distance from the listener.

46 vivid virtual acoustic environments are included, featuring true to life 3D imaging and depth, in which to place an object’s sound and move it around in real time.

In Realtime Auralization mode, turn six knobs to respectively adjust the distance from the listener of the four walls, ceiling and floor in your virtual space; as you move your sound around to match an onscreen object’s movement, the delay times and directions of arrival for early reflections bouncing off these virtual boundaries change—just like in real environments.

An Occlusion control lets you adjust the sound of an object to realistically match its being blocked by another virtual object in line of sight to the listener.

And if a track’s sound doesn’t move in perfect sync with its corresponding visual element, you can tweak its animation curve using separate scaling controls for azimuth and distance parameter ranges to make picture and sound match up flawlessly.

dearVR pro outputs the highest-quality 3D audio in seven delivery formats (including audio for 360-degree videos on YouTube and Facebook).