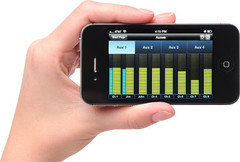 PreSonus has announced new updates to its industry-leading StudioLive series digital mixers, including a number of features not found on any other digital mixer from any manufacturer, at any price.