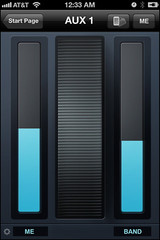 QMix works a lot like SL Remote: One or more iPhones network wirelessly with a Mac or PC, enabling QMix to remote-control Virtual StudioLive, which in turn controls one or more FireWire-connected StudioLive mixers. When each iPhone connects to the new network, its copy of QMix will discover all StudioLive mixers on the network. In this way, each musician can quickly and easily create an aux mix that includes all mixer channels.

Of course, you don’t want band mates messing with each other’s monitors — and the engineer doesn’t want to referee a band fight. So QMix lets the engineer set permissions so that each iPhone on the network only controls a specified mix. It’s our way of encouraging peace on-stage and goodwill to band mates.

Portrait view presents the Wheel of Me, which lets you select multiple “Me” channels and turn them all up in your monitor at the same time, while controlling the relative balance between you and the rest of the band. Landscape view provides control of the aux-mix send level and pan position (for linked auxes) for each channel and aux. This is where you set up your monitor mix.

QMix will be a free download from the Apple App Store and is expected to be available in January 2012.