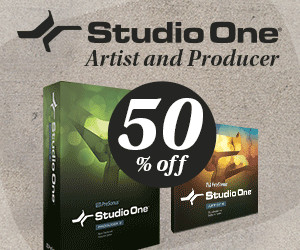 PreSonus has launched a limited time sale on Studio One Artist and Producer, offering a 50% discount through August, 2013.

Boom! Halvsies! Right down the middle. From August 1 through August 31, 2013, Studio One Artist and Studio One Producer (full versions, not upgrades) are half price. This is an excellent opportunity to get into the world’s fastest-growing DAW at an unbeatable price.

Studio One Artist was a monster of a good deal already, allowing for unlimited tracks of MIDI and audio recording with drag-and-drop ease. And if you’re feeling a step or two beyond entry-level, Studio One Producer includes significant feature upgrades from Artist, including MP3 import/export and virtual instrument support.

This offer is available worldwide and applies to retail boxed copies of Studio One, as well as purchases from StudioOne.PreSonus.com. No rebates. No paperwork. Just big savings.