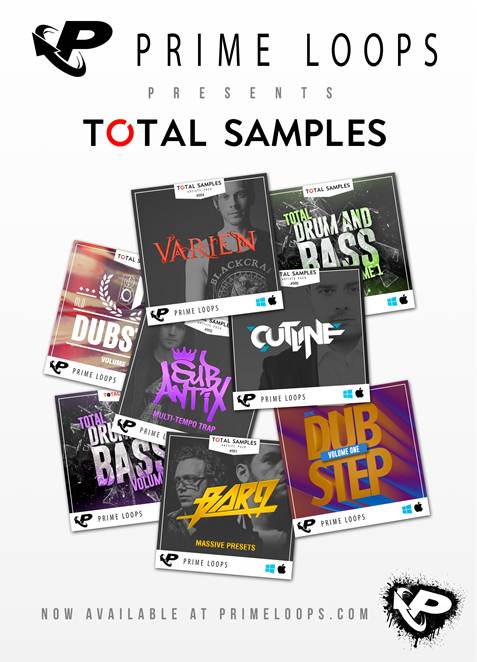 Prime Loops has teamed up with the crew behind Bass Music label Disciple Recordings to launch Total Samples, an exclusive new range of royalty free Producer Sounds and Preset Banks for Musicians, Music Producers and DJs.

Established in 2008, Prime Loops has been providing cutting-edge sounds to the worldwide producer community for many years. Top artists such as Skrillex and Knife Party have previously used Prime Loops samples in their productions. This is not to mention Prime Loops artist sample packs by Dance music dons like Calvertron, Sinden and Doctor P (Atlantic/MOS).

Disciple Recordings was founded in 2013 by Rob Talbott (one half of Dodge & Fuski) and Rossy Burr (one half of Astronaut). Rob and Rossy had also had previous success with their Drum & Bass alias Mediks, having seen millions of youtube plays and licenses to D&B Arena compilations. Since May 2013 Disciple Recordings has exploded onto the scene and become one of the hottest labels in Bass music, with regular top 10’s in the Beatport Dubstep chart and continuous support from UKF.

All sound libraries by Total Samples will be available as instant download via primeloops.com. Forthcoming releases will include Artist Sample Packs by the likes of Muzzy, Spag Heddy, High Maintenance and many more.