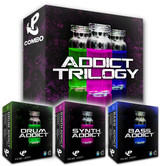 Prime Loops has announced the release of the Addict Trilogy, a bundle of three sample libraries.

After ‘Synth Addict’ was released, it became Prime Loops’ best-selling release of all time, and earned 10/10 Excellence Award from Music Tech Magazine. Then came ‘Bass Addict’ & ‘Drum Addict’ completing the Trilogy. now the full Addict series is available, and at a discounted price!

The Addict Trilogy contains over 450 loops, and weighs in at nearly Gigabyte. The sample pack concentrates on the upfront, modern side of genres such as Dubstep, Electro House, Tech, Breaks and the like. Bass, Drums and Synths parts come in abundance, and have been designed to gel together to quickly create tracks.

The Addict Trilogy is available to purchase exclusively from Prime Loops, priced at £39.95 (normally £50.95).