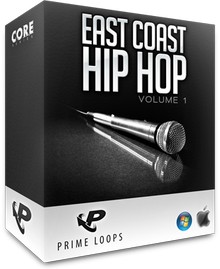 ‘East Coast Hip-Hop Volume 1’ packs the history of East-side Hip Hop into its bag of musical swag! Ever since the “Golden Era” of the 1990s, Hip Hop has owed a large part of its fame and fortune to East Coast producers and rhymers. With New York as its headquarters, East Coast Hip Hop emphasizes a harder, darker, more alert sound, as well as lyrical and rhythmic dexterity.

Crisp hi hats, booming basslines, collosal synths, grinding drum loops and much more make up all 300MB+ of “East Coast Hip-Hop Volume 1“, just begging to be thrown into your productions the East Coast way. These loops and one-shots have been created to get your tracks banging and your MCs flowing – its time to get producing!

The Prime Loops team has been hard at work to bring you beats dripping with the edgy East Coast sound and came up with so much material that we decided to create a series out of it. Volume 1 introduces you to our million-dollar sonic quality but have no doubt that Volume 2 will bring you anything less!

The sample pack is available to purchase for £16.95 GBP.