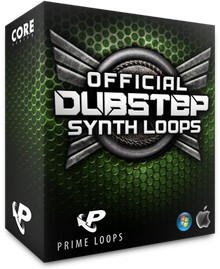 OFFICIAL DUBSTEP SYNTH LOOPS is the brilliantly twisted new sample pack from Prime Loops that strives to bring volumes of vexation to your mix!

Comprising a cataclysmic collection of loops that will infect your mix with an extra-terrestrial edge, this pack promises to possess any production with a seemingly infinite selection of searing swells, fragmented frequencies, meandering robo-buzz, shrieking sonic fuzz and sugar coated riffs that submerge into splendidly sour palpitations!

Weighing in at 400MB, each of these authentic loops is produced to a superior standard and mastered by the Prime Loops professionals right here in London where Dubstep’s dark heart spawned.

So if you’re looking for a comprehensive selection of synth loops savage enough to run with the big bass sound, get a firm hold on ‘Official Dubstep Synth Loops’ – it’s officially overpowering!

The sample pack is available to purchase for £14.95 GBP.