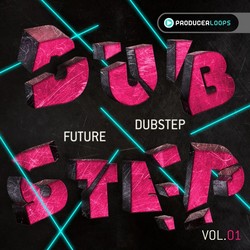 Combining the power and aggression of Dubstep with an almost quirky air of retro-futurism, ‘Future Dubstep Vol 1’ delves deep into new sonic territory. You’ll find everything from deep wobs and dark FX to 8-Bit synth glissandos and euphoric pads.

Each kit is underpinned by a huge rhythm section, incorporating the traditional half time Dubstep beat, all of which is separated out into various stems allowing you to create endless new variations.

One-shots of all percussive sounds are also included, so you can create new complimentary beats and fills.