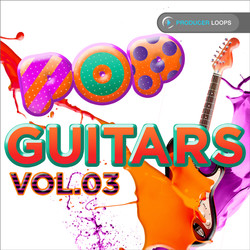 ‘Pop Guitars Vol 3’ is the third awesome pack in this exciting series of versatile guitar loops recorded in LA and mixed and mastered in the United Kindom for Producer Loops by Simon Rudd of “The Fliptones”. This amazing series brings you REAL guitars designed for producers of modern Pop and commercial music.

Nothing beats the sound of a REAL guitar and the amazingly talented guitarist used in this production is one of the TOP session guitarists in LA.

‘Pop Guitars Vol 3’ brings you a selection of riffs that come in a variety of keys, with both dry and FX loops included. There’s also a bonus folder containing drum loops and other FX to add some flavour and excitement to your next Pop hit.

The Loop Loft announces Six Spooky Deals – Up to 75% off