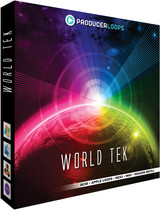 Producer Loops has announced the release of World Tek, a sample library featuring a blend of Harp, Dulcimer, Shakuhachi and Bamboo Flute performances mixed in an abstract, post-modern style.

World Tek is available to purchase for £19.95 GBP.