After a sold-out launch event in 2010, Producer Sessions Live 2011 features more producers, more gear and more opportunity for today’s music makers to get on the fast track to success. 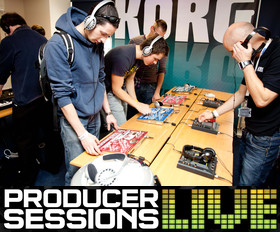 Taking place at the state-of-the-art SAE London studios on Sept 3rd and 4th, Producer Sessions Live 2011 features intimate tutorial sessions from some of the biggest names in music production, alongside the chance to get hands-on with the latest hi-tech gear.

As the creators of countless chart and club hits, Artful Dodger, Dave Spoon, Nu:Tone, Danny Byrd, D.Ramirez, Stonebridge, Starsmith and many more will be giving you the chance to learn the tips and tricks that make hits for megastars such as Lady Gaga, Jay Z, Kylie, Kayne West, Robyn, and Tinnie Tempah in a series of workshop master classes.

Run by Future Publishing’s MusicRadar.com, Future Music and Computer Music magazines, Producer Sessions Live also features gear rooms filled with everything from mixing desks to synths and software, with experts on hand to demo the kit and answer your questions.

And get involved with Producer Sessions Live 2011 right now via our amazing remix competition. Head to www.soundcloud.com/producersessionslive and download the parts to Joey Negro’s No Sugar. Remix it, upload your mix to the PSL SoundCloud drop box and you’re in with a chance of winning a gear bundle worth over £3,000! The best remix will be chosen by Joey Negro himself and a panel of producers on the final day of Producer Sessions Live.