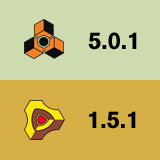 Propellerhead Software has released updates for Record and Reason, its music production applications for Windows and Mac.

We are happy to announce the immediate release of Record 1.5.1 and Reason 5.0.1 — free maintenance updates that resolve several minor issues in Reason and Record.